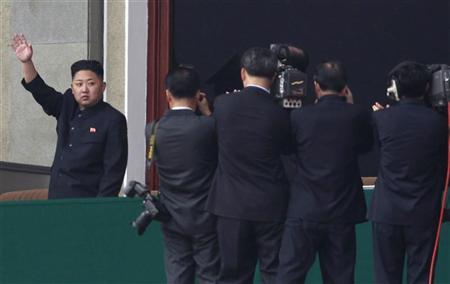 Jong-un first travelled to Switzerland in 1991, aged eight or nine, rather than in 1998 as has previously been established, Le Matin Dimanche and the SonntagsZeitung reported, citing official Swiss police documents.

Little is known about the leader of the reclusive communist state, who took over from the late Kim Jong-il last year, not even his exact age.

Local education director Ueli Studer told Reuters in December that a boy known as Pak Un, registered as the child of a North Korean embassy employee, had attended a school in Berne from 1998 until late 2000.

School friends have identified Pak Un as Kim Jong-un and Swiss newspapers say they have proven – through a scientific comparison of a school photo and current pictures of the North Korean leader – that the two were one in the same.

On Sunday, the newspapers said it was not clear where the boy had gone to school between 1991 and 1998.

Berne’s international school has declined to comment on whether he attended that school, where his older brother reportedly spent some time.

U.S. Secretary of State Hillary Clinton said last week that the fact that Kim Jong-un had lived outside North Korea might mean he would change political course despite his country’s recent rocket launch and the threat of a new nuclear test.

In the News – Worth it? Failed launch costs North Korea food aid

The U.S. will not go forward with planned food aid for North Korea after the nation’s unsuccessful attempt to launch a long-range missile rocket, the White House said.

“Despite the failure of its attempted missile launch, North Korea’s provocative action threatens regional security, violates international law and contravenes its own recent commitments,” the White House said in a statement condemning the launch.

President Obama has been prepared to engage with North Korea in a constructive manner, the statement said, but he also insists that the country live up to its earlier commitments and international obligations.

In the News – N. Korea high on agenda at G-8 meeting

By Lee Chi-dong
WASHINGTON, April 11 (Yonhap) — U.S. Secretary of State Hillary Clinton said Wednesday that she and her G-8 counterparts will discuss ways to reduce tensions on the Korean Peninsula, with North Korea set to launch a long-range ballistic rocket.

“I think we all share a strong interest in stability on the Korean Peninsula and we will be discussing how best to achieve that,” the secretary said at the start of a meeting with foreign ministers of the Group of Eight major economies.

The two-day session, under way at the Blair House, a state guest house near the White House, comes ahead of the G-8 Summit to be held at Camp David May 18-19. The group also involves Russia, Germany, France, Britain, Japan, Canada and Italy,
Clinton accused Pyongyang of pushing for such a provocative move at the cost of a Feb. 29 deal under which it pledged to suspend missile and nuclear activities. In return, the U.S. had planned to provide massive food aid. END_OF_DOCUMENT_TOKEN_TO_BE_REPLACED

In the News – Clinton urges China to stop repatriation of N. Korean defectors

By Lee Chi-dong
WASHINGTON, March 9 (Yonhap) — U.S. Secretary of State Hillary Clinton made clear Friday that her government is opposed to the forceful repatriation of North Korean refugees, a breach of international agreements.

“We urge every country to act according to international obligations,” such as the 1951 U.N. refugee convention and the 1967 protocol, Clinton said in a joint press conference with South Korean Foreign Minister Kim Sung-hwan after their talks at the State Department building in Washington.

She was responding to a question on China’s policy of sending back North Korean defectors to their authoritarian and impoverished nation. Recently, China has repatriated around 30 North Koreans, according to human rights activists, although there is no government-level confirmation. END_OF_DOCUMENT_TOKEN_TO_BE_REPLACED

In the News – U.N. chief voices concern over N. Korean defectors in China

NEW YORK, March 8 (Yonhap) — United Nations Secretary-General Ban Ki-moon expressed “deep concern” Thursday over the fate of North Korean defectors in China, which has emerged as a key diplomatic issue between Seoul and Beijing, according to his office.

In a meeting with visiting South Korean Foreign Minister Kim Sung-hwan, Ban “shared the deep concern with the Foreign Minister about the dislocated people from the DPRK, and encouraged the concerned parties to do their utmost to find a mutually agreeable solution,” the U.N. leader’s office said in a press release.

Ban, formerly a South Korean foreign minister, also reiterated his worries about the severe food and nutrition problems in the North and welcomed some progress in talks between the U.S. and North Korea, Ban’s office said.

The South’s foreign minister, meanwhile, told reporters that the Seoul government and the U.N. agreed to continue consultations over the humanitarian issue in the North.

Kim said Seoul was trying to confirm press reports of the pending repatriation of North Koreans caught by Chinese authorities.

He is scheduled to hold bilateral talks with Secretary of State Hillary Clinton in Washington on Friday.