In the News – N. Korea’s military chief Ri Yong-ho relieved of all posts

SEOUL, July 16 (Yonhap) — North Korea said Monday that its military chief Ri Yong-ho, known as one of the closest confidants of leader Kim Jong-un, has been removed from all his posts because of his “illness.”

But the KCNA did not elaborate on whether Ri also lost his position as the army’s chief of the General Staff or whether a successor has been selected for the outgoing official.

The 70-year-old Ri, who rose to the ranking positions in the Kim Jong-un regime, was previously known as a key figure who helped Kim seize control of the military following the death of his father and former North Korean leader Kim Jong-il last December.

Ri is believed to have been one of the most influential military figures in the communist country, having risen from obscurity as Kim Jong-un started to be groomed to become the leader around 2009.

He became the North Korean army’s vice marshal and the vice-chairman of the Central Military Commission in 2010, one year after he took the position of the army’s chief of General Staff.

He was one of eight top officials, including Kim and Kim’s uncle Jang Song-thaek, who escorted the funeral coach of Kim Jong-il last December.

Ri has often appeared next to the new leader during the young leader’s military inspection visits and other official occasions.

While the dismissal heralds a major change in the North’s military power structure, some analysts pointed out the removal could be politically motivated rather than a result of Ri’s illness.
“We cannot rule out the possibility that the army chief of the General Staff Ri Yong-ho was dismissed on account of Kim Jong-un’s unsatisfactory military grip or as a result of a power struggle in North Korea,” said Chang Yong-suk, an analyst at the Institute for Peace and Unification Studies at Seoul National University. 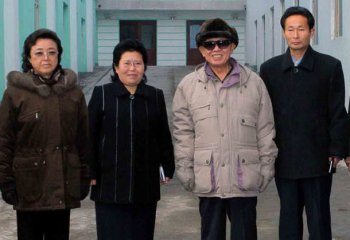 Many of you may already know of Kim Kyung Hee. She is famous for being Kim Jong Il’s sister and, more importantly, his most loyal adviser. As important as her position within North Korea is, I think it’s important to spend time taking a look at who she is.

Kim Kyung Hee was born in 1946, four years after her brother, Kim Jong Il was born. Both she and Kim Jong Il were born under Kim Il Sung’s first marriage with Kim Jong Suk. Their mother died at a very young age of 32 in 1949, just three years after giving birth to Kim Kyung Hee.

Kim graduated from Kim Il Sung University, North Korea’s most prestigious university. It is here, that she met her husband, Jang Sung Taek. According to Hwang Jang Yup, North Korea’s highest level defector (former international secretary of North Korea’s Worker’s Party), the two met while studying political economics together. Mr. Hwang remembers Jang as “not a particularly good student, but as a member of the arts society he was a talented accordion player, singer and dancer. Above all, he was sensible and shrewd.” END_OF_DOCUMENT_TOKEN_TO_BE_REPLACED

In the News – Kim Yeo Jung: The Backdoor Delegate

A source in Seoul has revealed that Kim Jong Eun’s sister Kim Yeo Jung has been selected as a delegate to the upcoming 4th Chosun Workers’ Party Delegates’ Conference, which is scheduled for the 11th of this month.

“Kim Yeo Jung was not given the right to that position through a Party members’ election, she was given it on the recommendation of the Party Delegates’ Conference Preparatory Committee,” the source explained. “At the end of last month when elections for Party delegates were going on in the People’s Army and the provinces, cities and counties, Kim was also unanimously selected as a Party delegate by the Conference Preparatory Committee, and that was then approved by the Party Central Committee.”

END_OF_DOCUMENT_TOKEN_TO_BE_REPLACED

In the News – Obama to China: Help rein in North Korea

(Reuters) – U.S. President Barack Obama urgedChina on Sunday to use its influence to rein in North Korea instead of “turning a blind eye” to its nuclear defiance, and warned of tighter sanctions if the reclusive state goes ahead with a rocket launch next month.

“North Korea will achieve nothing by threats or provocations,” a stern-faced Obama said after a tour of the heavily fortified border between the two Koreas resonant with echoes of the Cold War.

Such a launch would only lead to further isolation of the impoverished North, which much show its sincerity if on-again-off-again six-party aid-for-disarmament talks are to restart, Obama told a news conference in the South Korean capital.

Seoul and Washington say the launch will be a disguised test of a ballistic missile that violates Pyongyang’s latest international commitments. North Korea says it merely wants to put a satellite into orbit. END_OF_DOCUMENT_TOKEN_TO_BE_REPLACED