Continuing the sports theme, I’d like to talk about Ultimate Frisbee. Or, more specifically, Ultimate Frisbee in North Korea. I know, it’s hard to imagine North Koreans running around throwing Frisbees and engaging in just a friendly competitive game. But it’s true!

North Korea is hosting the International Frisbee Tournament, to be held on August 11, 2012. More than 50 Western tourists will participate in this “Peace Tournament” with no political agendas whatsoever, but to simply have fun and make a good impression on the North Koreans as a Westerner. END_OF_DOCUMENT_TOKEN_TO_BE_REPLACED

Last month I introduced to you Luke Elie. You might have seen him in the news recently because he’s been quite a sensation since his trip to North Korea. He’s been extremely busy with all of the interview requests from big name news outlets like CNN, but I managed to bribe him into meeting me for brunch. Coming from experience, connections and food will go a long way.

When he asked me what I’d like to ask him in regards to his trip to North Korea, I told him that I had no interest in the politics of it. There is plenty of information out there on the politics of North Korea and its current state and I didn’t think that it would be necessary to add another redundant article to that list. What I was curious to hear about was his personal experience and interactions with the North Koreans he met while there.

I also didn’t want our meeting to be a stiff interview but instead wanted it to be just friends getting together to catch up… which will then result in an article. But let’s not linger on that. We met at Itaewon in Seoul, or the foreigners’ district, on a rainy morning and ate at a restaurant that specializes in brunch foods. We sat down and just started to talk. I told Luke what I had been up to since high school, which is when I last saw him, and he told me his story about how he ended up going to North Korea. I felt like it was a fair deal. END_OF_DOCUMENT_TOKEN_TO_BE_REPLACED 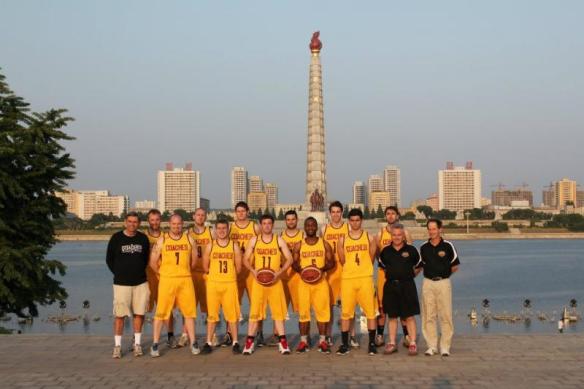 Luke Elie and his basketball team in North Korea.

Honestly, I’m not a huge sports fan. I don’t have a team that I follow nor is there a sport that I play regularly, although I did play varsity volleyball in high school but that was already six years ago. I’m just like any other average Korean when it comes to sports. Every two years I gear up to cheer for the Korean team competing in either the World Cup or the Olympics. And then when it’s over I go back to being pretty much oblivious to sports. The 2012 London Olympic Games are scheduled to begin on July 27th, but until then I thought I’d share an interesting sports story about a man named Luke Elie. END_OF_DOCUMENT_TOKEN_TO_BE_REPLACED

On Friday 3rd of December 2011, former US secretary of state Madeleine Albright addressed the future of US foreign policy and the leadership of women in helping to build prosperity, foster peace, and promote democracy across the globe at the London School of Economics in London, United Kingdom. This lecture was part of her tour to the UK to promote the Madeleine Korbel Albright Institute for Global Affairs with Wellesley College, her alma mater. The first female secretary of state had an hour-long Q&A session following giving a speech on women’s need to be more active and supportive of each other. After a number of questions about her experiences as a woman, Dr. Albright was asked to talk about her experience in North Korea. She gave the audience a detailed narrative on her trip. END_OF_DOCUMENT_TOKEN_TO_BE_REPLACED