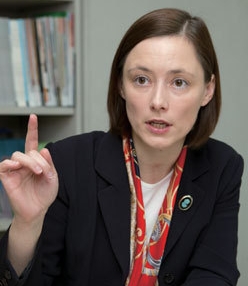 Today I’d like to introduce to you another foreigner in Seoul working for North Korean human rights. Meet Joanna Hosaniak.

Joanna is a senior programs officer with the Seoul-based NGO, Citizens’ Alliance for North Korean Human Rights (NKHR). She was born and raised in Poland and became interested in North Korean issues while working at the South Korean embassy in Poland. She then had a chance to work with NKHR when she helped organize an event in Warsaw. She was then offered a position and moved to Korea in 2004 and has been working on North Korean human rights since then.

Joanna brings an interesting perspective to the field because she grew up experiencing communism and knows what that looks like. “As head of NKHR’s international campaign and cooperation team, she says her experience watching Poland overthrow communism is vital to her work raising awareness and assisting North Korean defectors.” Having grown up in a communist state where her parents had to smuggle prohibited books for her, she feels even more strongly the need to do what she can to help those suffering in North Korea.

In an interview with Chosun Ilbo, when asked what she thought about South Koreans who are pro-North Korea she answers as follows:

When asked what she would like to do when unification happens she answers,

“I’d like to teach human rights in North Korea. Human rights education will be needed for people from all sectors after unification, so I’d want to go to North Korea, set up an NGO and teach people what I know about human rights. I experienced a life without freedom, although it wasn’t as extreme as North Korea, and I definitely know how painful that is, so I’m sure I would be more sympathetic to them and understand their situation.”

Joanna mentions that the issue of North Korean human rights does not receive enough attention in South Korea. There is still much to be done here in South Korea in relations to just raising awareness about the issue. She warns that “if South Korean society doesn’t wake up on the issue now, it could be vastly unprepared for eventual unification.”