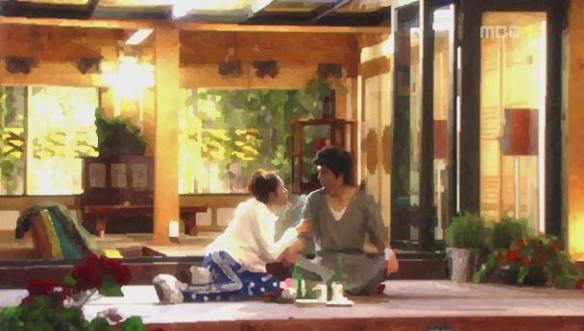 A screenshot of Lee Min Ho and Son Ye Jin from the first Korean drama your correspondent ever watched, “Personal Preferences.” South Korean dramas are one of the most important sources of new information now becoming available to North Korean citizens. Photo credit MBC.

Typically I scan the web for my information about North Korea. Most of my sources are from Internet news stories, usually in US or Korean media. But now and then I stumble upon a primary source, and they are phenomenally, refreshingly satisfying.

North Korea, according to a new study produced by InterMedia, is experiencing a huge increase in foreign media penetration. The study finds an increased awareness of the outside world, positive perceptions thereof, and a growth of trust between citizens.

Hopeful observers recall the surprising effect of access to technology in the Arab Spring revolts in 2011 and imagine a similar uprising in the future for North Korea. A more logical analysis suggests that any change will be slow. Access to outside media in North Korea is still extremely low; mobile penetration is around 2%, and 80% of North Korean citizens say that word-of-mouth is the most common means of information dissemination in the country. State media comes in a distant second at 40%.

A survey of defectors from and travelers in North Korea provided the authority for the survey. About 650 defectors, refugees, and travelers were interviewed in 2010 and 2011 and the results analyzed in “A Quiet Opening: North Koreans in a Changing Media Environment”.

The report suggests that such exposure to outside media inside North Korea is increasing positive perceptions of the outside world. Though, interestingly, it seems to have no effect at all on the beliefs or attitudes about North Korea itself.

One of the most surprising findings is the influx and influence of foreign DVDs. They match official state media as a common source of information, with 40% of respondents in the survey ranking them as the most common source of new information. 48% of defectors interviewed had seen at least one DVD, and many reported watching them in family groups or even friends.

One defector described her experience: “I usually watch them with my family and neighbors who think alike. At most I’ve watched with about six people, which is just one more person plus my family.” There was a time when sensitive information or behavior couldn’t  be safely shared with family for fear of informing; now, it seems, the state’s reach has eroded past the confines of family and trusted friends.

Most foreign DVDs are entertainment; they usually contain South Korean dramas or films, although some might have Chinese or Western films instead. These entertainment media are really the cornerstone of all the new media penetration in North Korea; one defector described it like this: “At first I watched outside media purely out of curiosity. However, as time went by, I began to believe in the contents. It was an addictive experience. Once you start watching, you simply cannot stop.”

American consumers of Korean dramas (your correspondent included) would agree.

There is much more to learn; come back for further juicy details on the surge of outside media in North Korea in Part 2 and Part 3.

1 thought on ““Once You Start Watching, You Simply Cannot Stop”: Part 1 of 3 on Outside Media in North Korea”